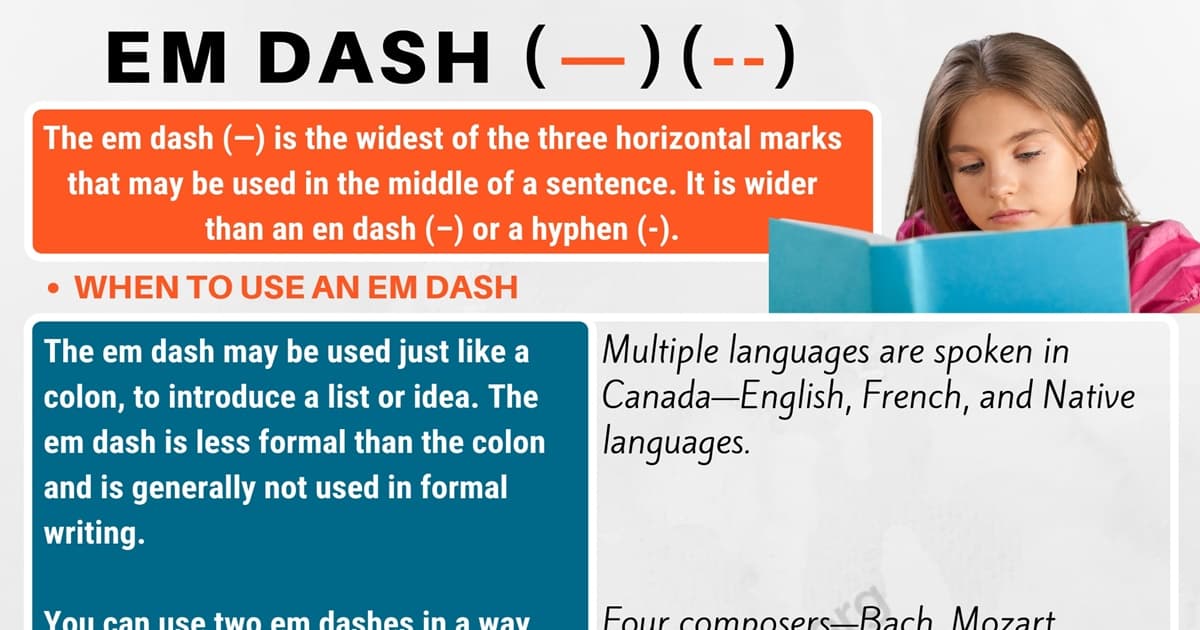 Em Dash (—) or ( — ) There are several horizontal marks that may be used in the middle of a sentence—the em dash (long dash), the en dash, and the hyphen. Each has a different function.

What is an em dash?

The long dash is the widest of the three horizontal marks that may be used in the middle of a sentence. It is wider than an en dash (–) or a hyphen (-).

Not all fonts and keyboards allow you to produce a long em dash. If it’s not possible to make the long dash, two hyphens may be used instead.

It doesn’t matter whether you put spaces around the m dash–just be consistent.
Don’t do it one way and then the other — that’s distracting for the reader.

When to use an em dash

This punctuation mark has several functions. It may be used just like a colon, to introduce a list or idea. The m dash is less formal than the colon and is generally not used in formal writing.

You can use two em dashes in a way similar to the usage of parentheses—to insert an explanation, an example, or added information in the middle of a sentence.

The long dash may be used to emphasize an idea that appears at the end of a sentence. If used this way, it is stronger than a colon.

In representing speech, the long dash may be used to show an interruption either by a second person or by the speaker himself or herself.

The em dash vs. the en dash and the hyphen

The en dash and the hyphen are generally used in compounds—terms consisting of more than one word. Do not use the long dash in these situations.

For more information, see the pages for the hyphen and the en dash. 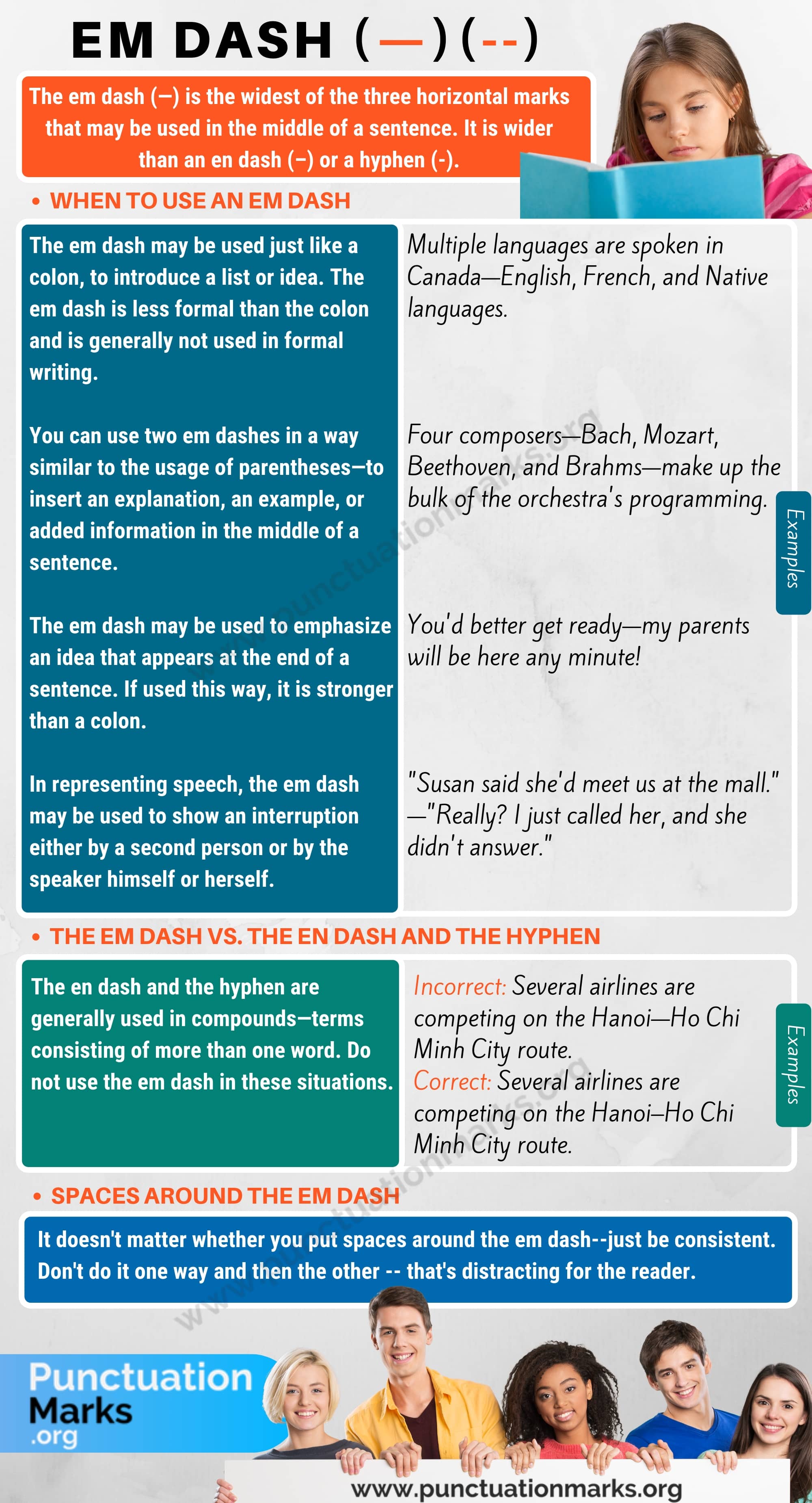 Rules for Using the Em Dash

Rule 1: Does your sentence contain a list that is introduced by a pause in the middle? If so, you can use either an em dash or a colon. The colon is more formal.

There are three types of dashes—the em dash, the en dash, and the hyphen.

Rule 2: Does your sentence contain information in the middle that is secondary to the main idea of the sentence? If so, you can set it off with either em dashes or parentheses. The m dashes are a bit stronger than the parentheses in connecting this material to the main parts of the sentence.

The clock—which was given to me by my grandmother—has to be wound every morning.

Rule 3: Does your sentence have quoted material with an interruption? If so, show the interruption by using a long dash.

“I’m ready to go to the mall now.” —”Wait! Amber just called and said she wants to ride with us.”

Rule 4: Do you want to attribute the source of a quotation in your text? Put an em dash between the speaker’s name and the quotation.

“If you love the law, and you love good sausage, don’t watch either of them being made.”—Unknown

Rule 5: Does your paragraph already have a lot of m dashes? Take some of them out! The m dash is powerful when used correctly, but a lot of em dashes in a paragraph may confuse the reader. Replace them with parentheses or commas, or just start a new sentence.

The two main tributaries to the Ohio River—the Allegheny and the Monongahela—run through industrial areas and are polluted with chemicals—fluorides, agricultural runoff, and mercury.

The two main tributaries to the Ohio River, the Allegheny and the Monongahela, run through industrial areas and are polluted with chemicals—fluorides, agricultural runoff, and mercury. 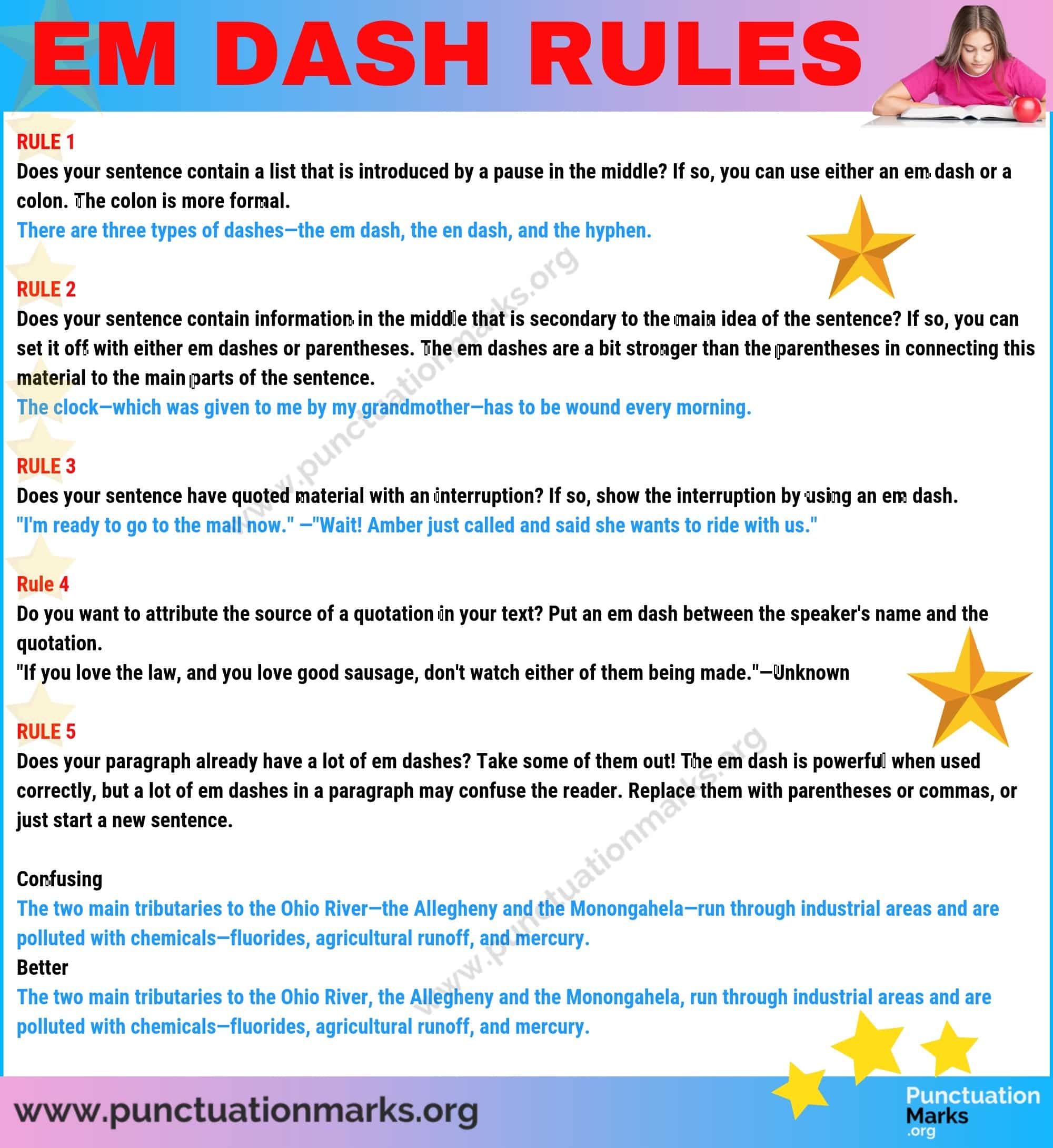 what kind of dash is used in formal letters to exclude other letters.
Mrs e_______p

Like the one you used here? That’s an underscore, not a dash.

And the 400-yard dash is used when you want to get away from writing!