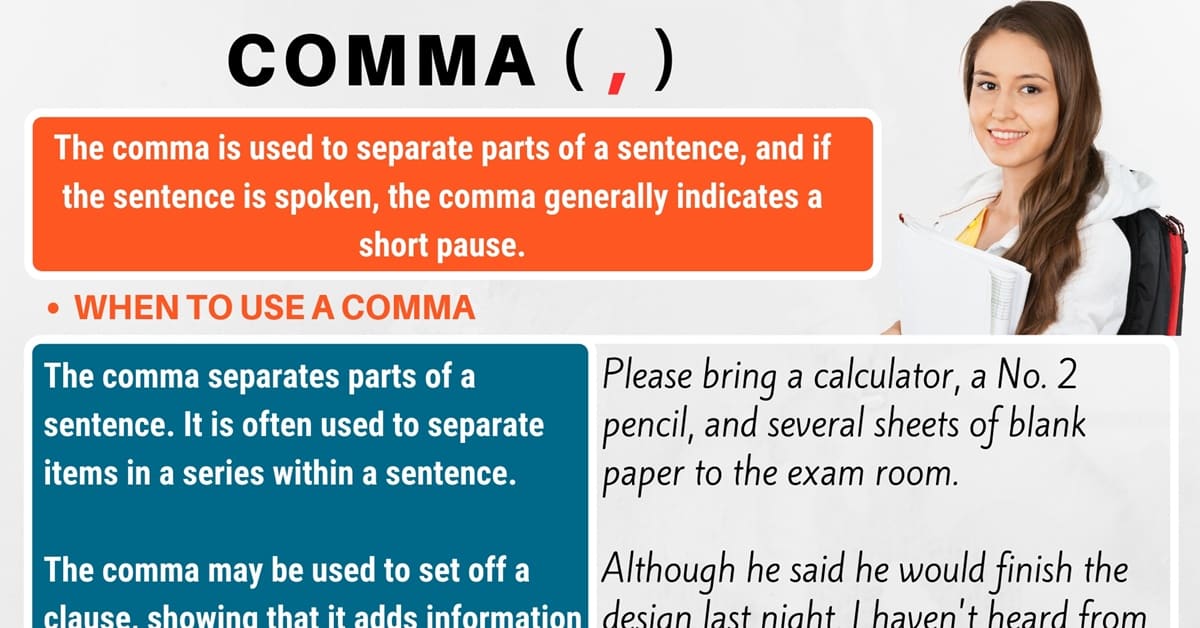 Learn how and when to use commas (,) with comma rules in English. This punctuation mark is used to separate parts of a sentence, and if the sentence is spoken, the comma generally indicates a short pause.

Also, learn whether or not to use the Oxford comma with examples.

When to use a comma

The mark separates parts of a sentence. It is often used to separate items in a series within a sentence.

This punctuation mark may be used to set off a clause, showing that it adds information to the main body of the sentence.

If a subordinate clause appears in the middle of a sentence, use two commas to set it off. Omitting the second one is a common mistake.

Also, it is used in a sentence where someone is being addressed by name.

What is the Oxford comma/serial comma?

The Oxford comma, also known as the serial comma, is the mark that may appear in a series before the “and” near the end of the sentence. Writers and editors disagree about whether it is necessary.

Examples with the Oxford comma:

Examples without the Oxford comma:

Neither method is right or wrong. Leaving out the serial comma can result in comically ambiguous sentences (“I’d like to thank my parents, my agent Elizabeth and God”), but in most cases such sentences can be rewritten.

How to use the comma with quotation marks

In British English, the mark (,) goes outside the closing quotation mark.

When to Use Commas | Infographic 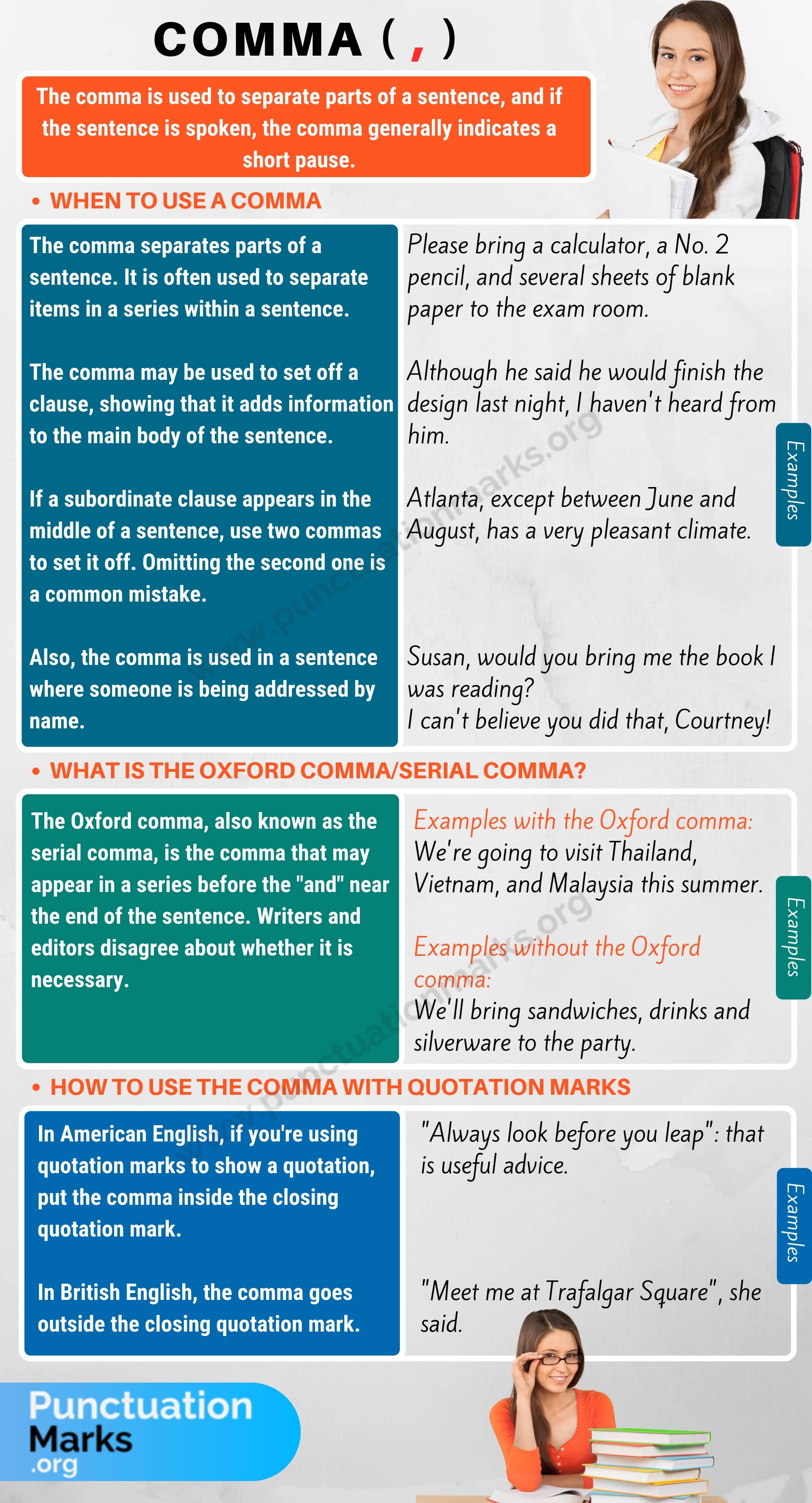 Learn ten rules for when to use the mark (,) in English with examples.

Do you have a series of three or more items in your sentence? Separate them with commas. Some people say you should use the mark (,) between the next-to-last item:

This is the so-called Oxford comma or serial comma. Others omit this comma: dollars, euros and yen

Whether or not to use the Oxford comma is a matter of style. But you should be consistent in how you use it.

Does your sentence contain two complete sentences connected by a coordinating conjunction like “and,” but,” or “so”? If so, generally use the mark (,) before the conjunction. This is more common in American than in British English.

Does your sentence contain an introductory section? Generally it will be clearer to the reader if you set it off with a comma. You can omit the mark (,) if the clause is very short, but be wary of leaving it out.

Does your sentence have two or more adjectives in a row describing the same noun? If so, use a comma between the adjectives. Exception: Do not use the mark (,) if the second adjective is part of a common set phrase.

Can part of your sentence be left out without changing the basic meaning of the sentence? If so, use the marks (,) before and after that part. This includes names of states, titles, and years in dates.

Does your sentence depict a statement made to someone? If so, set that person’s name or pronoun off with commas.

Does your sentence start with an introductory word? Set it off with the mark (,).

Does part of your sentence contain an “and”? If so, separate a two-part sentence with a comma even if the second part is not an independent clause (complete sentence).

Would you pause during your sentence to make it clear? If so, add the mark (,) at the place where you’d pause, even if it’s not covered by other rules. 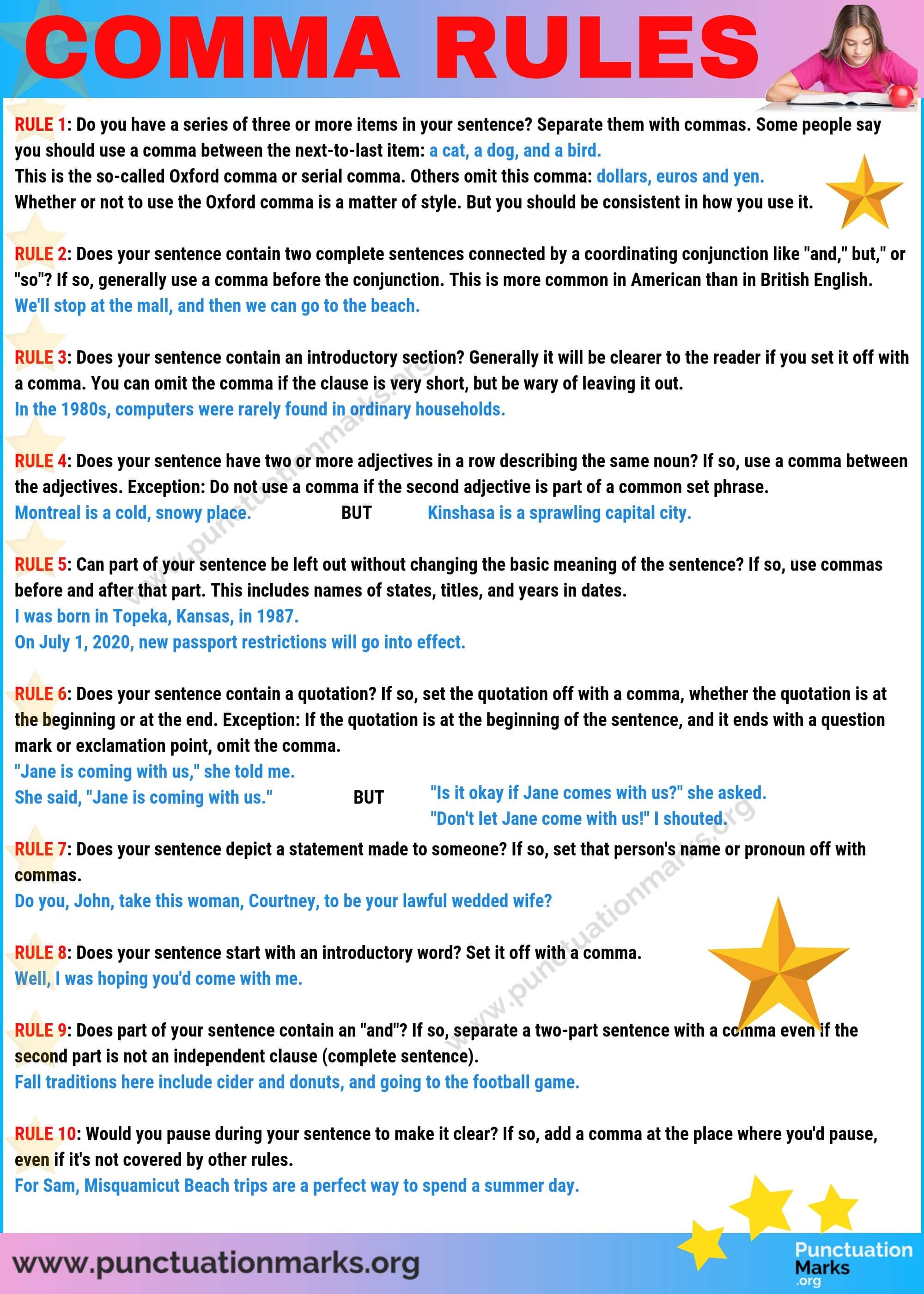 This helped to clear-up my confusion regarding the use of the comma.